What Is Eddy Current Testing? 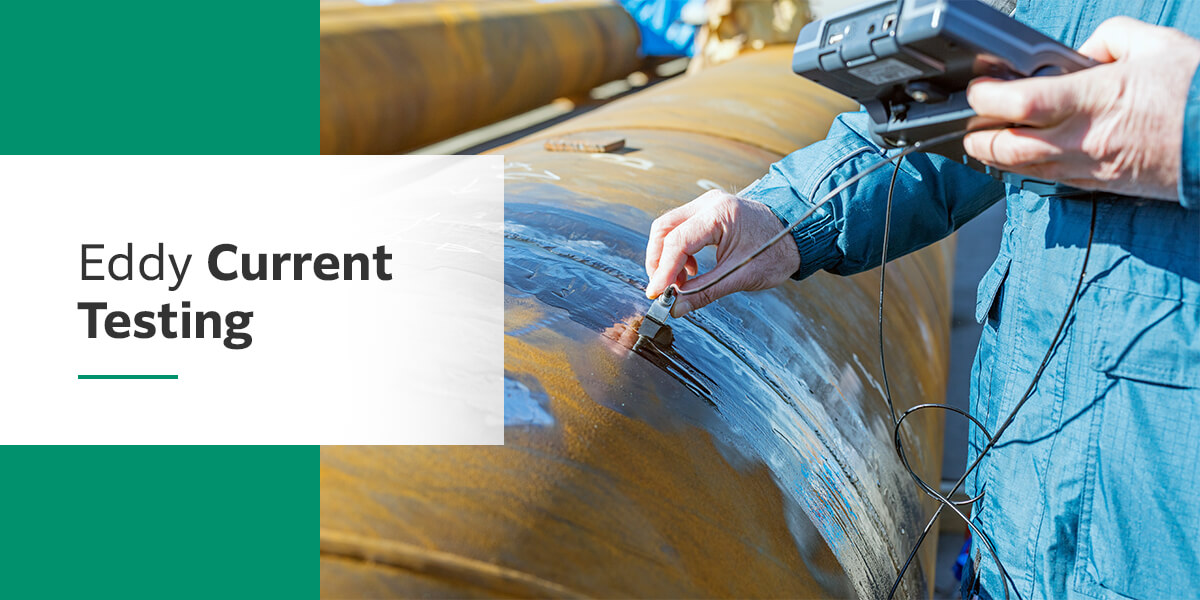 There are many approaches to detecting defects in components in the world of non-destructive testing (NDT). Some forms of NDT rely on visual inspections, magnetic particles or radiography. Non-destructive testing is a valuable tool in developing accurate components, and learning about the types can uncover valuable means of inspecting material quality.

Eddy current testing (ECT) is one of many NDT methods, and it’s well-known for its sensitivity and reliability. Understanding the ECT process can help you determine if it’s the appropriate NDT method for your inspection needs. 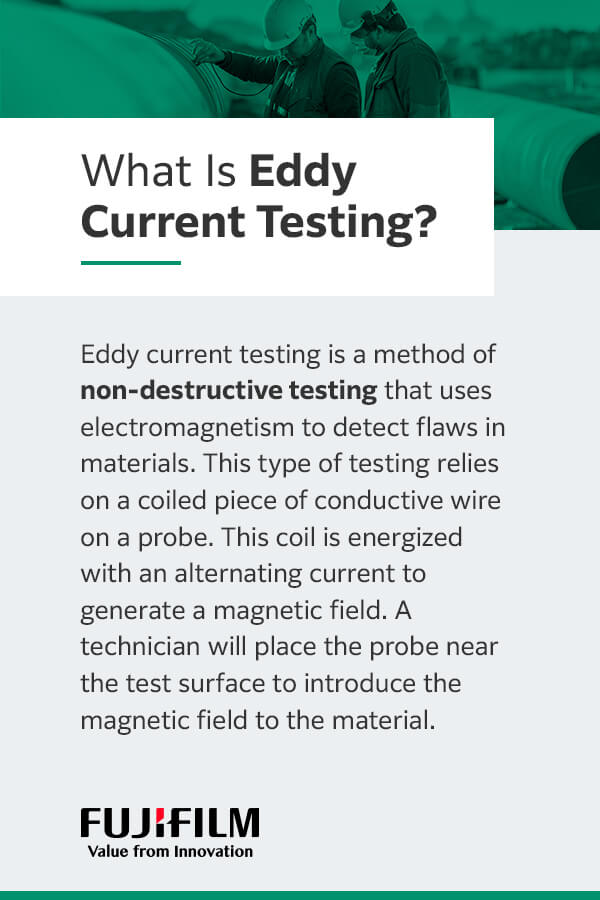 What Is Eddy Current Testing?

Eddy current testing is a method of non-destructive testing that uses electromagnetism to detect flaws in materials. This type of testing relies on a coiled piece of conductive wire on a probe. This coil is energized with an alternating current to generate a magnetic field. A technician will place the probe near the test surface to introduce the magnetic field to the material.

Once the process is complete, a specialized professional — often different from the tester — can read the collected data and determine if there are any flaws present. The data interpretation stage is vital for deciding which current behaviors indicate a defect.

How Does Eddy Current Testing Work?

Eddy current testing relies on electromagnetic induction and the concept described in Lenz’s law. The probe used in ECT uses a conductor with an alternating current, thus creating a magnetic field around the object. As the alternating current rises and falls, this field expands and contracts.

Changes to conductivity, like changes in thickness and surface defects, will modify the eddy current’s magnitude. Either the primary coil or a second detecting device is used to track these changes.

Eddy currents have higher density and sensitivity at the surface of a conductive material, and these factors decrease with depth. Permeability — the ease at which a material can be magnetized — and conductivity will affect how well the eddy currents will respond to defects. When inspectors apply this technique, they have to determine the best frequency for the necessary penetration and sensitivity with the testing material.

Inspectors must be thoroughly trained to complete an eddy current test. A qualified professional will abide by the standards set out by varying governing bodies. Abiding by these standards is expected in all forms of NDT. Since operations rely on accurate results, the testing procedure must also be accurate.

There are several standards that outline best practices and requirements, but the main governing bodies are:

What Is Eddy Current Testing Used For?

ECT is often used to inspect tubing, like metal tube components and steam generator tubing. Due to higher material thickness, tubing inspections work best with non-ferromagnetic materials. Other common materials that undergo inspection with ECT include:

Industries like oil and gas, aerospace, power generation, automotive and manufacturing rely on ECT to ensure the accuracy and safety of many materials and components.

When an inspector leads an eddy current testing procedure, they must decide what type of method to use. There are several approaches to the process, and each procedure works well for different materials and requires various tools to complete. One of the most notable differences in these methods is the probe types they use.

ECT’s versatility makes it easy to choose a method that will deliver the best results for the test material at hand.

Eddy current array (ECA) uses a series of coils to cover a larger area in a single pass than the standard, single-coil probe. Generally, a line of coils like this comes with the risk of mutual inductance when two coils are activated next to each other. This mutual inductance could then affect the results of the inspection.

ECA addresses the potential for mutual inductance with a process called multiplexing. In this process, the coils activate and deactivate in specific sequences to make use of the probe’s complete width. These sequences are designed to minimize the interference between coils while optimizing the probe’s resolution.

While ECA equipment is ideal for gaining comprehensive data about surface flaws, operators will need additional training to run the inspections. In addition to more required experience, ECA comes with a longer setup time than a standard ECT. While the inspection itself is faster, the overall time difference may not be notable.

Lorentz force ECT is a relatively new testing method. This approach uses a permanent magnet in relative motion to the component under test. The relative movement introduces the eddy currents in accordance with Ohm’s law for moving conductors.

If there is a defect in the material, the disturbance in the eddy currents or the secondary magnetic field is detected by the Lorentz force acting on the permanent magnet. This method is meant to address a common problem in standard ECT — the skin effect. This effect refers to a current’s tendency to crowd at the surface of a conductive material, limiting inspection capabilities.

While Lorentz force ECT is novel, it can offer accurate test results with more depth than a standard eddy current test.

This eddy current testing method is designed specifically for inspecting heat exchanger tubes, and it’s one of the most popular types. Heat exchangers are used in wastewater treatment, chemical, nuclear and other plants for heating and cooling industrial processes. These tubes are often exposed to high fluid pressure, leading to pitting, cracking, corrosion and other surface and subsurface flaws.

Surface array testing is a type of ECT that is most often used in the aerospace industry. This method excels at detecting corrosion and wall thickness changes with high accuracy, and it can measure conductivity.

This approach uses the current array probe as seen in ECA, but it includes a corrosion mapping aspect to create a clear picture of pitting and thickness changes in stainless steel surfaces. This method can often find defects where other approaches can’t, making it the method of choice for high-accuracy applications.

While ECT can be a beneficial approach to NDT, it does have limitations. Some of the disadvantages include:

Though ECT comes with its disadvantages, there are other NDT methods that can fill in these performance gaps and possible challenges. Working with a professional trained in NDT can help you achieve the inspection accuracy your operation requires, whether you opt for ECT or another procedure. 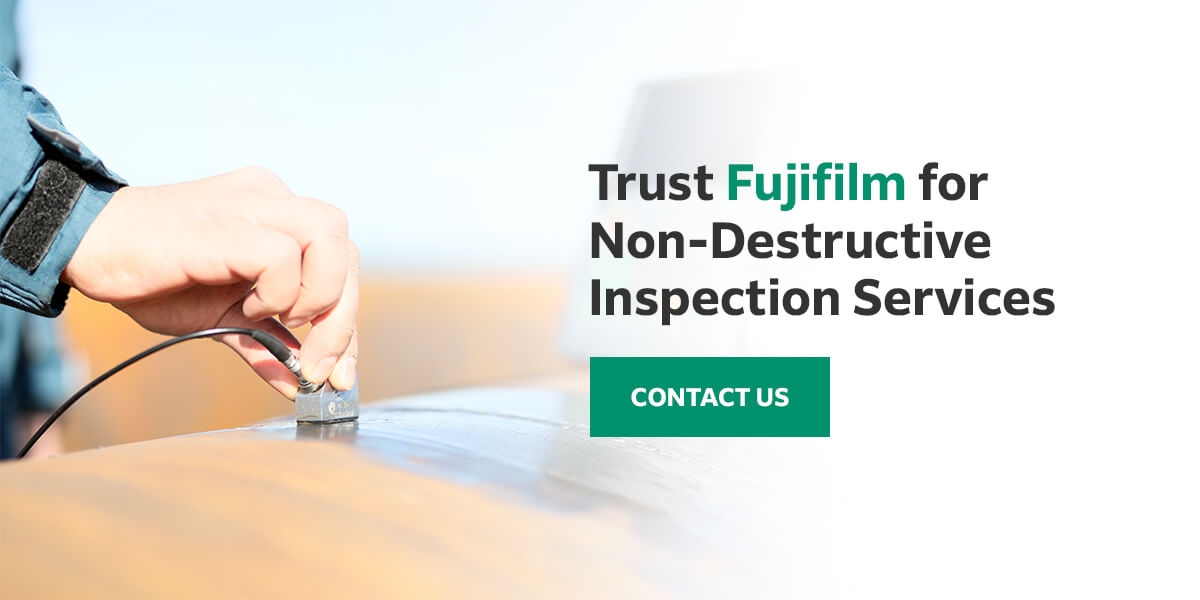 With the many benefits of eddy current testing, many operations rely on its capabilities. Whether you operate in oil and gas, transportation or aerospace, ECT can be a valuable aspect of project development and component maintenance.

At Fujifilm, we understand the importance of carrying the right tools for eddy current testing and other forms of NDT. Our product lineup for NDT equipment features radiography systems and conventional X-Ray machines to suit your NDT needs.

In addition to our equipment, we prepare your team with our NDT training services. Knowing how to use inspection equipment is critical for accurate results. Our company offers decades of industry experience to ensure our training programs are comprehensive. Our instructors teach according to relevant industry standards and bring their real-world experiences to the classroom.

To learn more about our products and training services, get in touch with us today.